Arise and Shine Children’s Home was founded in July 2005 and since its beginning has steadily grown. The home is now well established, fully registered with the Kenyan Government and Provincial Children’s Welfare Department and many children’s lives have been both spared and transformed.

The ongoing work of Arise and Shine also enables it to provide support to the neighboring community by employing local staff and buying local produce.

The children are brought to them via the Children’s Welfare Department and are signed over to their care by the Kenyan courts. When the children first arrive they are often barefooted with no other belongings other then the rags in which they are standing. The children are initially provided with two sets of clothes, one for Sunday best and the other for everyday use. Those that are old enough are also provided with a school uniform and equipment and have their school fees paid to enable them to attend the local school. Some require extra tuition as academically they are so far behind their peers – an education is a privilege that few had previously been able to afford. In addition, Arise and Shine aim to provide the opportunity to learn relevant skills as they approach adulthood to enable them to become self-supporting, capable of competing in a global market. 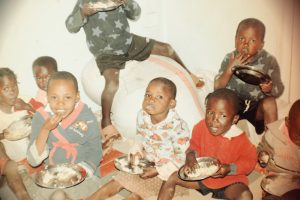 They are now part of a large family, sharing a bedroom with children of the same sex and similar age. They enjoy their food together around the table; especially those who have never tasted meat before and many soon start to put on weight more appropriate to their age. The condition of their skin and hair noticeably improves as they benefit from eating a balanced diet some of which is now grown or reared by us on rented land.

How did we help?

Concern was raised about the condition of the boy’s dormitory, as holes in gutters and walls contributing to frequent illness during the rainy and cold season. Silent Voices raised capital to fund structural repairs, helping to ensure that the organization can continue to serve as a safe and comfortable home for at-risk children.